Process of the EB-5 Program

PROCESS OF THE EB-5 PROGRAM

As the below diagram shows, the EB-5 program includes three steps:

Initially, the documents are prepared to be sent to the United States Citizenship and Immigration Services (USCIS) along with form I-526. Different documents should be collected depending on whether the investor decides to proceed through the EB-5 regional center or direct investment. The applicant’s application will be sent to the USCIS after the initial procedures.

Suppose the investor does not reside in the United States when he/she receives USCIS approval. In that case, the person should send the documents along with form DS-260 to the U.S. consulate. The investor may receive a U.S. visa after attending an interview at the consulate. A conditional green card will be issued following the investor’s entry into the United States. If the EB-5 investor already has lawful status in the U.S., then the investor’s documents and form I-485 will be submitted to the USCIS to adjust status. Consequently, a conditional green card will be issued.

Between 21-24 months of the investor’s entry into the United States, his/her documents and form I-829 are sent to the USCIS to acquire unconditional permanent resident status. 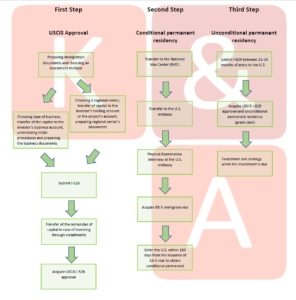 Have a question about filling out the required forms?

One of our certified attorneys can walk you through the process.

Participation in the EB-5 program necessitates investing a significant amount of capital. Therefore, you would need to have an experienced and committed team’s support by your side.  With years of experience in immigration and equipped with the most experienced immigration attorneys, we can be the best companion in helping you receive a U.S. green card through the EB-5 program.