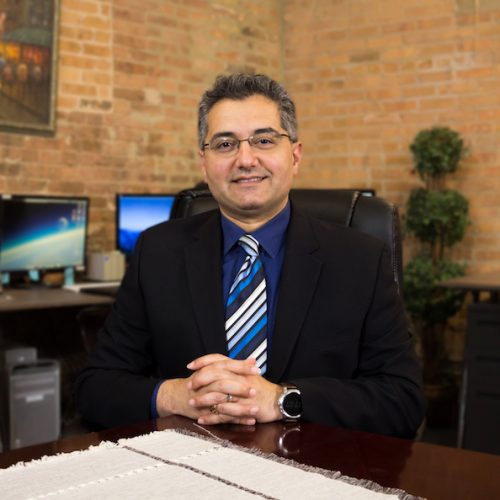 Since 1996, Taher Kameli has served as the founding partner of the Law Offices of Kameli & Associates, P.C. He is a member of the bar of Washington D.C., the State of New York, the State of Illinois, and the U.S. Supreme Court. Throughout his career, Mr. Kameli has dedicated himself to issues arising from our current age of globalization. He specializes in immigration and corporate law and is a strong advocate for international business.

Since 2009, Mr. Kameli has facilitated over $100 million dollars of foreign investment through USCIS-designated Regional Centers under the EB-5 Program to create sustainable jobs in the United States. Mr. Kameli has remained at the forefront of the EB-5 Program with creative solutions to complex business immigration issues and through engagement USCIS. Mr. Kameli has worked with investors from around the world for many years and has successfully relocated many businesses internationally through the E2, L1, and EB-5 programs. Further, Mr. Kameli has a weekly international show, broadcast in several countries in the Middle East region, in which he informs foreign investors about U.S. immigrant investment programs, answers question about the EB-5 Immigrant Investor Program and discusses current affairs in the Middle East.

As a team, we have obtained many positive results for clients from around the world.

Greetings and respect! I met with Dr. Kameli and his colleagues. Team was knowledge with complete honesty and precision in solving my problems and exact procedures for obtaining a visa. Finally, I applied for a

I am very grateful to Dr. Kameli and his admired colleagues who guide us with care and patience. Best regards to Mr. Kamli and his esteemed colleagues.

Attorneys Taher Kameli and John Floss helped me a lot on those days I needed help regarding citizenship. They are very professional and attentive. They were always there for me and always showing care and

The lawyers talk realistically. They are honest and passionate about their job. I would highly recommend this law firm and the lawyers. They helped me for getting a visa for my wife. Thank you!

I contacted Dr. Kameli a couple of times regarding several issues and he has been always responsive and helpful in answering my questions and concerns.

Kameli Law Group gave me back my joy. When I thought that all hope was lost, I received an Olive brach. Laura, thank you for your selflessness. You contacted me even when you were not at

Hi ItÛªs proud of me to announce that I asked help to Dr KameliÛªs office since they are so supportive.Moreover,they followed up my situation seriously and gave me alot of information with open arms!And it

No doubt, Mr. Kameli is one of the best Iranian immigration lawyers. The significant point in their work is to be honest and frankly about clients and not giving false hope.

I had a case with Mr. Kameli many years ago. He had excellent performance in the court in front of the judge. I highly recommend him.

I commend Mr.Kameli for being such a great attorney. I will never forget the day I called his office for the first time, I felt hopeless. We had really hard immigration case that eventually turned

Mr. Kameli and the law firm team are really experienced with immigration matters. I worked with them for my family case and work visa case. Mr. Kameli is so patient and so smart. I am

Recently met Mr Kameli over the constitution to assist us in expending our business in the USA. We simply provided him with necessary documentation and he took care of the rest.He is very knowledgeable

I consulted Dr. Kameli several times and I firmly believe that he is the right person to refer to.

I and my wife hired Mr. Kameli to apply for green card through EB 5 direct investment program. He has a wonderful team and did a great job and helped us from start point to

He is amazing Immigration lawyer

Dr kameli is a typical example of a nobel person, whether in the work of human ethics, the profession and duties that you have always met the compatriots. i wish you the best.

I contacted this law firm to get some legal advice regarding immigration law through Emil. I got a thorough and detailed response. I was satisfied with the response.

Taher Kameli is an experienced immigration attorney whose legal expertise is complemented with business acumen. He is a warrior when it comes to defending and spending time and energy for his clients. Very reliable and

I have known Mr. Kameli, John and Laura for over 8 years now. The team is available when ever I have questions or need advice. I have recommended them numerous times. I would never go

I just asked Mr. Kameli a few questions about my case and he responed me with care in the shortest time, I'm thankful for his help.

I am very thankful for everything that they have done on my case. I rate them 10/10. They were there for me and always showing care and support. IÛªd HIGHLY recommend and would use them

very experienced and knowledgeable attorney. Mr Kameli knows his niche. Mine and my brother's case of business immigration process with Kameli went very smooth and turned to be successful. Definitely recommend

I was applying for a GC through marriage and the entire process went through very smoothly. The job was done accurately and punctually. I would highly recommend him and his stuff if you want to

I needed help with immigration petition, Mr. Kameli and Mr. Floss helped me with my case. They really care about their clients and give the best advice in difficult times.

I was in a quagmire as the new administration made the visa processing time longer and more stricter. I had received an RFE letter for a F2 application and it requested so many unusual documents

I have the honor to know Dr. Taher Kameli for quite some time.. He is very knowledgeable and responsible lawyer, so supportive & I dare to say he's the most honest lawyer I've ever met.

I would like to thank Kameli Law Group. for the GREAT WORK!!! I had a sale date on my property and they were able to stop that sale and approve my modification with

Dr Kameli and his team are the best! never lie to you like many lawyers!

highly recommend Taher Kameli, and his firm, Kameli Law Group, for helping with my immigration case. I had payed consultation (btw it's not free!) with Taher Kameli which was very knowledgeable. My case was

Had a chance to meet DrKameli over the constitution. We discussed my immigration goals and I've got some good and informative advices. Had consulted with couple other attorneys with good expertise in Eb5. After all

My experience was more than satisfactory. I hired them for a potential investing, they were helpful, on time, and explained everything I needed to know. Will return for future legal necessities.

Mr.Kameli is a professional lawyer , he has complete information about his job , he is committed and honest .

Let us add you to the map. Call our legal team today.